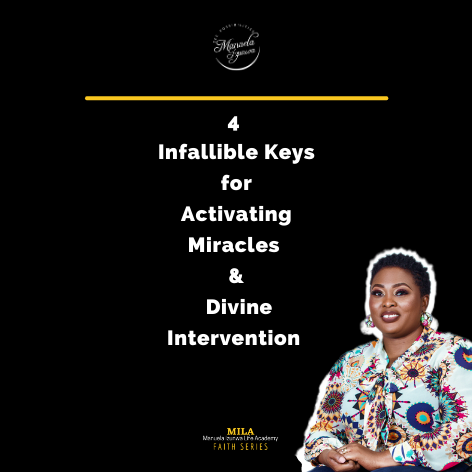 I have needed God’s help in my life, many times! I have made mistakes, been in difficult situations and been stuck in dead ends…and I have seen God come through for me. Today, I want to share four steps I have used to go from stranded to success over the years. It is my strong belief that as you apply these steps your miracles will manifest!

1. Imagine it; One of the most powerful tools we have as humans is the power of imagination. We can travel from continent to continent and even galaxies by the power of our minds. To enjoy the supernatural, we can use this skill too. Likening this to my Christian faith, I feel the process of imagining is somewhat like a “faith-release”. When a surge of belief for some non-existent thing gushes out from our hearts/minds, creation is taking place. It is based on this contraption (your imagination) that the construction takes place.

Let’s go back to the beginning, as the Bible tells us. In Genesis 1, “In the beginning, God created the heavens and the earth. The earth was without form and void, and darkness was over the face of the deep. And the Spirit of God was hovering over the face of the waters. And God said, “Let there be light,” and there was light. And God saw that the light was good. And God separated the light from the darkness.”

Two things I have concluded from this passage are—First, that all the while the Spirit was hovering over the waters a design was being developed. Second, it was after the pronouncement that God “saw” it was good. This is my persuasion; that God initially imagined before He produced. We like Him, because we were made in His image, should harness this ability of creativity to activate the miraculous in our lives.

So, release faith for it!

2. Ask for it; The second critical activity is that of praying. It is not enough to imagine or desire, we have to pray because God is the giver of all things good. Never be deceived into thinking you are the ultimate source for your life. God is the one who gives—either directly or indirectly. James speaking in James 4:2 said; You desire and do not have, so you murder. You covet and cannot obtain, so you fight and quarrel. You do not have, because you do not ask. Desire alone will frustrate you, it will lead you into many sins and sorrows. Many have entered affiliations, cults, soul ties, crimes, evil partnerships and compromises just to get their desires. And they have completely lost it; their purity and their destiny.

However, a desire that has been submitted to God gets to be sanctified and aligned to the design of God. These are the kind of desires God is interested in. These are the kind of wishes He grants. Indeed, a lot of prayers go unanswered because they are founded on immoral premises. Note the following verse, he said: “You ask and do not receive, because you ask wrongly, to spend it on your passions”. (James 4:3).

3. War for it; Do not ever forget that someone out there does not want your progress. He is called the devil and he is bent on keeping in in misery. What does he do? He fights to hinder and prevent your blessings from reaching you. I doubt if I will forget my astonishment as I first read Daniel chapter 10. I was like “What????!!!” 😱. So, Daniel had his prayers extended because someone was opposing him? As in, his answer was already given, but he could not receive it because someone was obstructing its way!? Was this a joke?

Of course, it was not a joke. God’s word is as serious as anything gets. The angel under discussion was Gabriel. This is what he had to say about his delay: “Then he said to me, “Fear not, Daniel, for from the first day that you set your heart to understand and humbled yourself before your God, your words have been heard, and I have come because of your words. The prince of the kingdom of Persia withstood me twenty-one days, but Michael, one of the chief princes, came to help me, for I was left there with the kings of Persia.”

4. Put praise on it; By this I mean, make an advance payment on your answer. There is a song by Tasha Cobbs I love so much: “Put a praise on it.” She sang about the miracles available for possession if we can do the preliminary worship. Praising, worshipping, dancing and singing—all forms of God celebration—have always been able to unlock the impossible to reach blessings. Praise is the extra that produces extraordinary testimonies.

In Acts 16:25-26, a phenomenal occurrence was recorded. Two apostles had been physically abused, battered and wrongly imprisoned. They had no hope for an escape, except by God. Then, “About midnight Paul and Silas were praying and singing hymns to God, and the prisoners were listening to them, and suddenly there was a great earthquake so that the foundations of the prison were shaken. And immediately all the doors were opened, and everyone’s bonds were unfastened.” Do you know you can create an earthquake to counter sickness, poverty, oppression, fear, evil manipulations, depression etc. simply by adding worship?

So, put praise on it!

I urge you, therefore, to take action with these keys: Faith, Prayer, Warfare and Thanksgiving do not fail. I pray that as you practice, the doors to the miraculous will open for you!

I am adding another point, especially for all those who have done all four above: Wait! That is my #5. God moves in mysterious ways. His timing is also far different from ours. Doing everything right does not necessarily guarantee immediate answers (success) but it does establish right-standing. That is what God calls righteousness. He keeps count and in due season, He pours out an avalanche of blessings. “And he brought him outside and said, “Look toward heaven, and number the stars, if you are able to number them.” Then he said to him, “So shall your offspring be.” And he believed the LORD, and he counted it to him as righteousness.” (Gen 15:5-6)

© 2020 - Manuela Izunwa - See Possibilities
Select the fields to be shown. Others will be hidden. Drag and drop to rearrange the order.
Click outside to hide the comparison bar
Compare